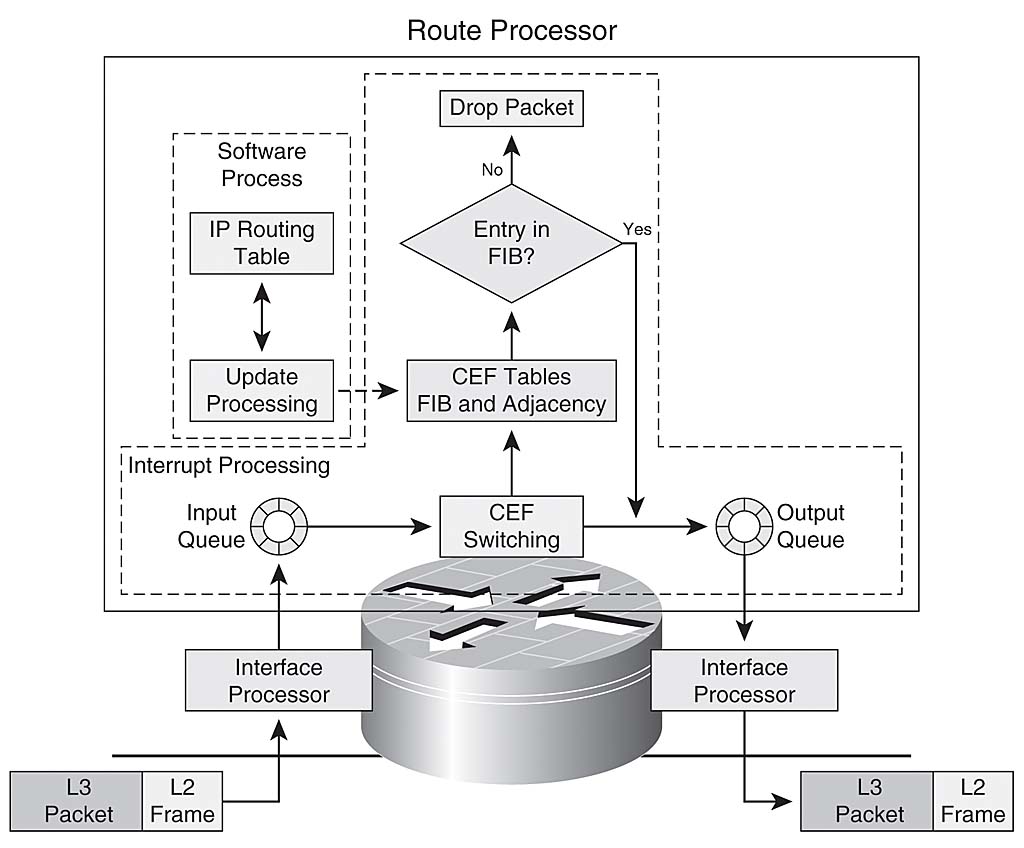 To understand this better, one has to understand why and how CEF came about.  With Cisco IOS  there are different Switching Methods, that define how packets are forwarded through a router. The first method, which happens to be the oldest and slowest is Process-Switching. Alternatively when  packets arrive, the interface processor can interrupt the central CPU and asks it to switch the packet according to a route cache or switching table. That cache or table can be built in several ways, the two of interest here are Fast-Switching and CEF.

With Process-Switching, when a packet enters the router the Layer-2 info is stripped off,   the packet is then copied to the CPU memory where a L3  lookup is performed, and any other CPU required features, like NAT, queuing, compression etc, along with any other housekeeping like lowering the TTL, recalculating the CRC are done, before the frame is rewritten with the new L2 destination address and sent to the outgoing interface. The Big, the Bad and the Ugly!

With Fast-Switching, the first packet in a flow is still copied to the CPU for the L3 lookup and housekeeping, before being rewritten with the L2 destination address. The switching of the ﬁrst packet by the central CPU gives the CPU the opportunity to build a cache called the fast-switching cache ‘Route Caching’ , which is used to switch all subsequent packets for the same destination using the same switching path across the router. With Fast-Switching the cache is only built on demand, which can be time consuming when huge numbers of potential destinations are involved. To avoid this a pre-build cache was needed, and thus CEF was born.

Route Caching is now been referred as Demand-Base

With CEF (Cisco Express Forwarding), there are two main data structures under now a Topology Base concept: 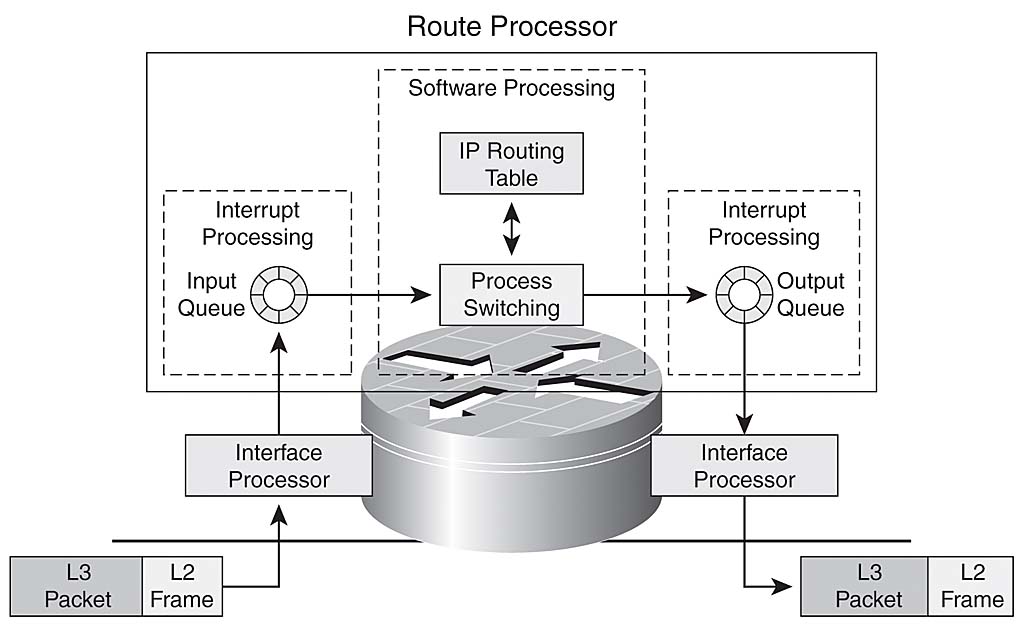 How The router Process the packet :
The router remove the header ( Layer 2 ) from the incoming packet
The router examine the layer 3 addressing and take a decision how to forward the packet .
The layer 2 is then rewritten , which could mean changing the source and destination mac address computing cycle redundancy check ( CRC )
Then the packet is forwarded to the right interface.
The inconvenient is that the 1st packet must always use Process Switching. 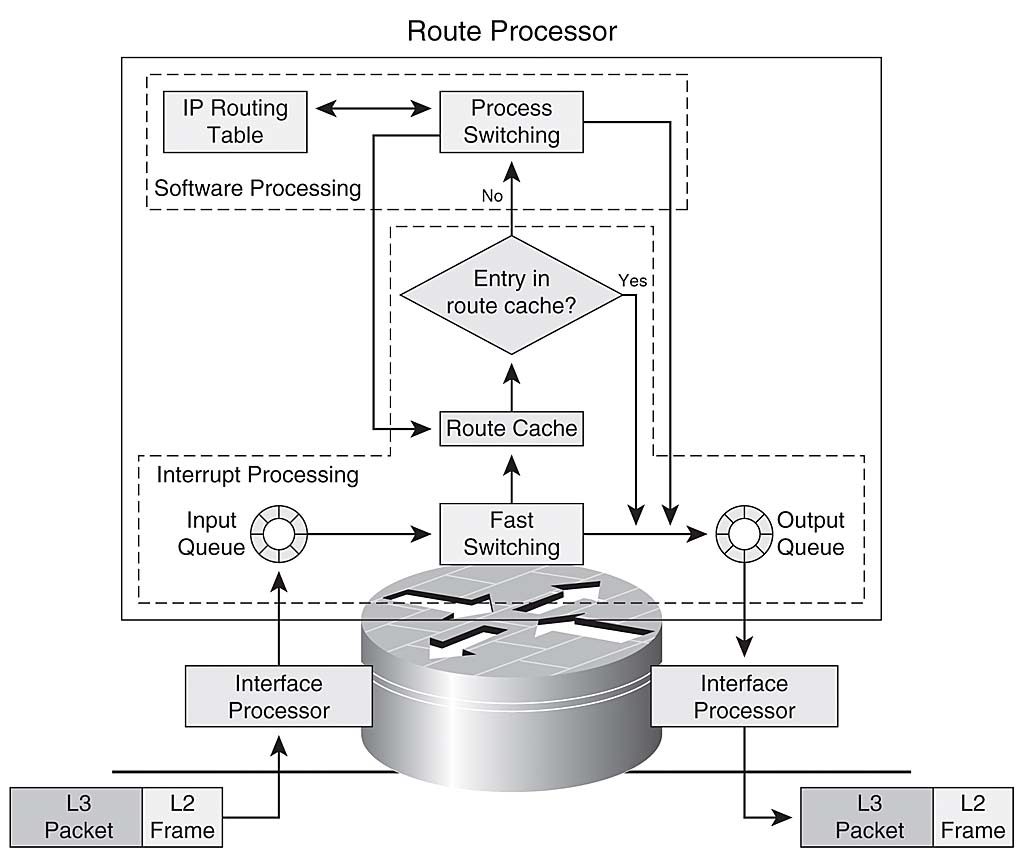 Fast Switching use the router cache maintain by the router data plane.

How The router Process the packet :
The 1st packet in a data flow is process by the cpu
The router determine how to forward the 1st frame of data flow from the router fast cache information .
Future packets with the same destination address that match the cache entry will be forward right away.
Fast Switching is also referred ” Route once, forward many times”.

To configure Fast Switching is can be configure on the interface by using :
ip route-cache

When a packet enters the router, the router strips off the Layer 2 information.
The router looks up the destination IP address in the CEF table (FIB), and it makes a forwarding decision.
The result of this forwarding decision points to one adjacency entry in the adjacency table.
The information retrieved from the adjacency table is the Layer 2 rewrite string, which enables the router to put a new Layer 2 header onto the frame,
The packet is switched out onto the outgoing interface toward the next hop.
CEF is enable by default on most routers if not we can enable it by default using the command : ip cef
you can enable it on a interface base by using the command : ip route-cache cef

First, examine the forwarding process itself. There are three steps to forwarding a packet through a router:

Each of these steps is critical for the packet to reach its destination.

Note: Throughout this document, the IP switching path is used as an example; virtually all the information provided here is applicable to equivalent switching paths for other protocols, if they exist.

The figure below illustrates the process switching path. Examine this diagram in more detail:

Almost all features that effect packet switching, such as Network Address Translation (NAT) and Policy Routing, make their debut in the process switching path. Once they have been proven, and optimized, these features might, or might not, appear in interrupt context switching. Examine this diagram in more detail:

The first question that comes to mind after reading this description is “What is in the cache?” There are three possible answers, depending on the type of interrupt context switching:

In Fast Switching, the reachability information is indicated by the existence of a node on the binary tree for the destination of the packet. The MAC header and outbound interface for each destination are stored as part of the node’s information within the tree. The binary tree can actually have 32 levels (the tree above is extremely abbreviated for the purpose of illustration).

In order to search a binary tree, you simply start from the left (with the most significant digit) in the (binary) number you are looking for, and branch right or left in the tree based on that number. For instance, if you are looking for the information related to the number 4 in this tree, you would begin by branching right, because the first binary digit is 1. You would follow the tree down, comparing the next digit in the (binary) number, until you reach the end.

Characteristics of the Fast Switching

Fast Switching has several characteristics that are a result of the binary tree structure and the storage of the MAC header rewrite information as part of the tree nodes.

Fast switching is entirely destination based; load sharing occurs on a per-destination basis. If there are multiple equal cost paths for a particular destination network, fast cache has one entry for each host reachable within that network, but all traffic destined to a particular host follows one link.

Optimum switching stores the forwarding information and the MAC header rewrite information in a 256 way multiway tree (256 way mtree). Using an mtree reduces the number of steps which must be taken when looking up a prefix, as illustrated in the next figure.

Each octet is used to determine which of the 256 branches to take at each level of the tree, which means there are, at most, 4 lookups involved in finding any destination. For shorter prefix lengths, only one-three lookups may be required. The MAC header rewrite and output interface information are stored as part of the tree node, so cache invalidation and aging still occur as in the fast switching.

Optimum Switching also determines the prefix length for each cache entry in the same way as fast switching.

Essentially, all cache aging is eliminated, and the cache is pre-built based on the information contained in the routing table and ARP cache. There is no need to process switch any packet to build a cache entry.

Other Entries in the Adjacency Table

A glean adjacency entry indicates that a particular next hop should be directly connected, but there is no MAC header rewrite information available. How do these get built and used? A router running Cisco Express Forwarding and attached to a broadcast network, as shown in the figure below, builds a number of adjacency table entries by default. The four adjacency table entries built by default are:

Note there are four entries: three receives, and one glean. Each receive entry represents a broadcast address or an address configured on the router, while the glean entry represents the remainder of the address space on the attached network. If a packet is received for host 10.1.1.50, the router attempts to switch it, and finds it resolved to this glean adjacency. Cisco Express Forwarding then signals that an ARP cache entry is needed for 10.1.1.50, the ARP process sends an ARP packet, and the appropriate adjacency table entry is built from the new ARP cache information. After this step is complete, the adjacency table has an entry for 10.1.1.50.

The next packet the router receives destined for 10.1.1.50 is switched through this new adjacency. Each loadshare table has 16 entries among which the paths available are divided based on the traffic share counter in the routing table. If the traffic share counters in the routing table are all 1 (as in the case of multiple equal cost paths), each possible next hop receives an equal number of pointers from the loadshare table. If the number of available paths is not evenly divisible into 16 (since there are 16 loadshare table entries), some paths will have more entries than others.